Be My Guest/Journalism 101: Clover Hope

A special treat today dear readers. Ms. Clover Hope, who blessed us with an awesome guest blog back in June, is back!

This time, she’s here to impart wisdom on the rewriting process.

I’ve said it before and I’ll say it til I’m in the blue face: Clover is nice with the words. I’m honored and excited that she’s agreed to giving us a peek into her methodology.

Clover recently wrote a piece for XXL magazine on the phenomena of southern dance music. (Do the Hally Berry!) Today, she guides us through her process, from rough draft to published piece.

On Re-Writing, Drafts and the Self-Editing Process

I’m an obsessive rewriter. Some writers can sit at their computers and pump out a story in one sitting. I can’t. Correction: I’m able to. But I prefer a few days or weeks to work on a lengthy piece.

The first draft is never the best in my eyes, especially if it’s a long story. The more you can revise a story, the better.

When I get to the point where I say:  “I HATE this story!” that’s when I know I’m nearly done rewriting. Nearly. I realize that doesn’t work for everyone. But I enjoy the process.

For an assignment, my self-editing process usually goes like this: I sit down to start writing after the interview is done and transcribed, after I’ve highlighted quotes that stand out, either on paper or in Microsoft Word. In the past, I would always rush to start writing the piece, but nowadays I pace myself and think about the story more beforehand, as long as there’s no quick turnaround. Better to have more ideas floating in my head. I will, however, jot down notes or phrases that pop up while thinking. Sometimes the best ledes come out of this.

I don’t do outlines. I’ve heard some crazy talk that it helps you stay organized or something like that? But I always end up structuring the piece on the spot. I’m usually extremely organized so I don’t know why I can’t do formal outlines.

When I was interning at Vibe a few years ago, the interns produced an in-house magazine called Vibe Remix. I was writing the cover story on the company’s president at the time, Kenard Gibbs, and had asked one of the Vibe editors for guidance. He asked whether I did outlines and said that it might help. I said, “Nope.”

I do always have an angle in mind beforehand. So after I have a good first draft, slaving over a lede that might not always end up as my final lede, I get into self-editing. 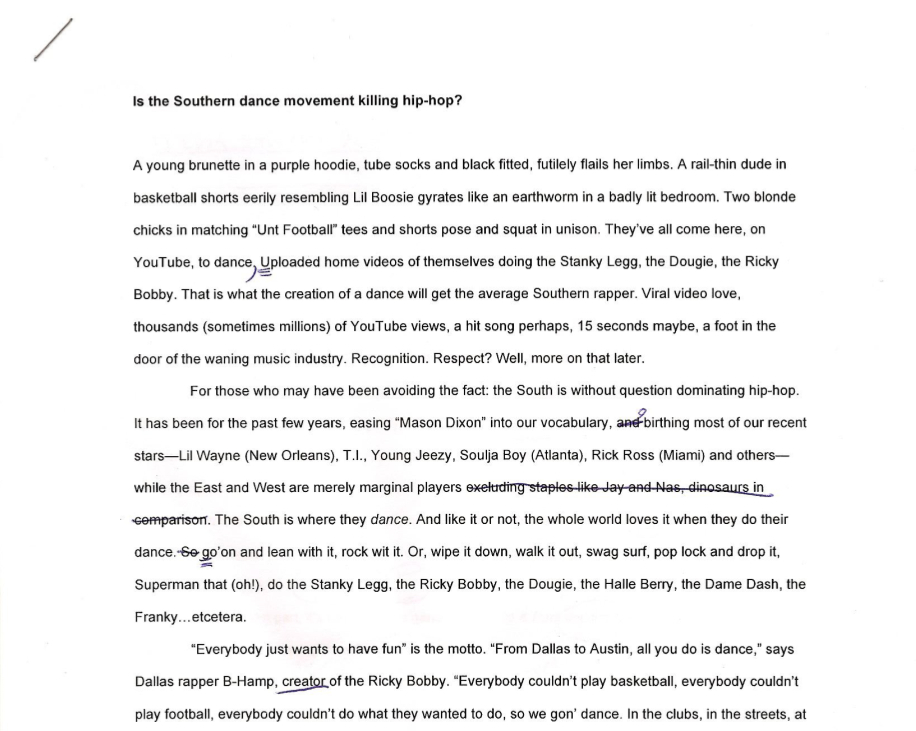 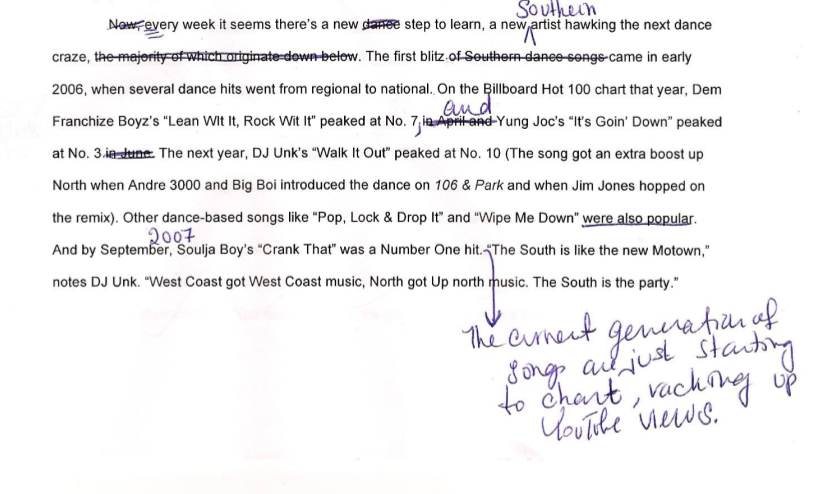 Usually I throw out my early drafts but for the purpose of this guest blog, I kept them and uploaded to my computer.

I hadn’t finished all of my interviews when I started writing (I don’t know if that’s bad) but I had done a bunch of research and surfed YouTube incessantly and I felt like, at least, writing down my thoughts. Above is what I wrote when I first sat down to write.

After looking at this, I realized that this could serve as my outline. I would advise doing a real outline if that works for you. This was an hour or so of writing. I sent it to myself to work on later.

See how she writes the letters B D and E at the bottom? I asked her what those letters represented. She told me it represented different sections of the story and where she needed to move things around.

Essentially, this is outlining. It’s all about seeing the big picture of your story. And then cutting it up into manageable chunks and rearranging them for clarity.

It just happens that Clover actually writes a draft before outlining. (I do the exact same thing.)

A lot of indecisiveness goes on, and I tend to go back and forth adding and taking away certain words or phrases. It is a bad habit I guess, but it’s part of my process. That said, here are some things to keep in mind.

1. Avoid repetition.
When I’m working on a story, I tend to repeat ideas over and over in an effort to prove my point. It’s a natural part of the writing process. But if you have two or more phrases that mean the same except that you’re saying it differently, don’t be afraid to take one out.

2. Tighten your transitions.
When I first started out, I had a really hard time with transitions. It’s an art in and of itself to not write something cliché. It’s about moving on to the next sentence or paragraph without being corny or excessive. It’s okay if you’re stuck to just move on. Sometimes I’ll write “Transition” and figure it out later.

3. Edit your descriptions.
Many times, I’ll have a general idea of what I want to say but don’t quite have the eloquence. In those cases, I’ll write the thought out and underline it. On the next round of self-editing, I try to come up with better phrasing. A good friend of mine gave me advice for whenever I’m stuck: Just write it in plain Midwest speak (she’s from Nebraska) and then go from there. This also goes for words you don’t like. The thesaurus is my best friend and I have no shame using it if I want to experiment with new words. I get tired of using “sultry” to describe a singer.

[Interjection from Aliya: I think I’ve described a singer as sultry about 1,464 times in my career. I’m banning that word. Effective immediately!]

4. Substitute quotes if necessary.
We’ve all learned that if you can’t write something better than how your subject said it, then just let the subject speak. In my Southern dance draft, I changed the sentence that starts with, “Some clubs in the South even show the music videos…” into the artist’s own words. Also, if a quote doesn’t quite have the right punch as you initially thought, take it out or find a replacement. Don’t fall in love with quotes that don’t make sense.

4. Cut, cut, cut, and cut some more.
I took a magazine writing class in college that basically made my journalism career. Don’t know where I’d be without it. My professor was the executive editor of ESPN The Magazine at the time and is now Editor. The most valuable thing I learned from that class is the power of cutting. Sometimes we fall in love with our words so much that we miss that we’re supposed to be telling a story that the reader understands. That’s where cutting comes into play. Cut. Once I get closer to the final draft, I start looking for words that can be cut and phrases that can be trimmed to read better and also get me closer to the word count.

And there you have it folks. Rewriting is really the only way to produce great writing. That’s why classic works of art take years, sometimes decades, to complete but end up sounding so natural. The purpose of my OCD self-editing is to complete a piece of prose that has flow, insight, readability, rhythm and a piece of me.

Here’s a great paragraph from the rewriting section in my bible, On Writing Well by William Zinsser:

“Rewriting is the essence of writing well: it’s where the game is won or lost. That idea is hard to accept. We all have an emotional equity in our first draft; we can’t believe that it wasn’t born perfect. But the odds are close to 100 percent that it wasn’t. Most writers don’t initially say what they want to say, or say it as well as they could. The newly hatched sentence almost always has something wrong with it. It’s not clear. It’s not logical. It’s verbose. It’s clunky. It’s pretentious. It’s boring. It’s full of clutter. It’s full of clichés. It lacks rhythm. It can be read in several different ways. It doesn’t lead out of the previous sentence. It doesn’t… The point is that clear writing is the result of a lot of tinkering.”

I really wish I could print the rest of that section but it’s too long. Get the book! Happy self-editing.

Did Clover help you figure out the re-writing process? Can you share your method for re-writing. If you print out as many versions of your story as Clover does, do you make sure to use recycled paper? Do you use a thesaurus when you write? Do you read your story aloud? Tell us about your revision process.

Clover and I would love to hear from you!

P.S. Have you ever used the word “sultry” to describe a singer? I know I have. I Googled. Ha. 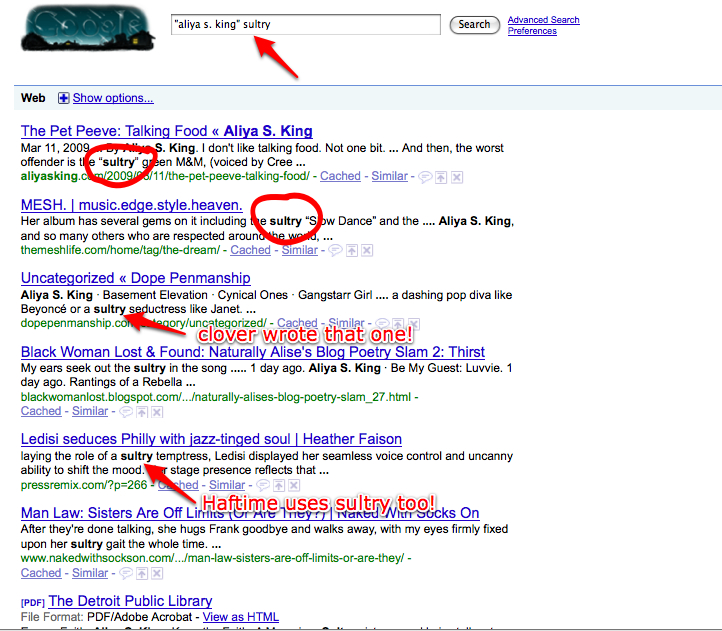