A minor league baseball team in Michigan offers this at the concession stand. If you finish it, you get a t-shirt. That you can be buried in. This is called The Fifth Third Burger. It's made with nearly 2 lbs of beef, cheese, chili, sour cream and FRITOS. This is not part of the eat better forever campaign.

It’s been six weeks since I confessed that I needed to drop a few pounds.

Now, I don’t own a scale. I never have and I never will. I have a compulsive personality and I know I would obsess over my weight if I had a scale. So for the past six weeks, I didn’t keep track of the number.

I only knew where I was when I happened upon that scale at Tog’s swim meet:

Which wasn’t so bad. And it’s not about the number anyway. I just know I wasn’t liking how I felt. And my clothes were fitting way snug.

Here’s what I did not do.

I did not work out.

I am doing yoga once or twice a week. But I don’t know if that’s a real calorie burner. I do it for my mind, not my body.

Here’s what I did do.

I changed my eating habits. Drastically.

No more ice cream at night. No more Panera. No more leaving the house without breakfast and lunch in a goofy lunch tote.

(I hate traveling with food. But this was the most important factor in my eat better forever campaign. The fact is, I have to be prepared to eat well for the day. Or I will end up at the drive-thru).

The preparation starts on the weekend. I make 12 hard boiled eggs. They keep very well in the fridge. So in the morning, all I have to do is crack one and wrap it up. I’ve also discovered Costco. Which has changed my life. More on that in another post. I buy a few things in bulk that are easy to toss in a bag. Dried fruit, nuts. They have these cut-up apples already in bags that are a lifesaver. I know it’s better for the environment if I buy whole apples and cut them myself. But the reality is, I won’t do that. I will eat some apples if they’re already sliced and in my bag. Great for Tog too. (TG has a severe apple allergy so she can’t eat them. She can only eat cooked apples.)

Right now, I’m sipping on some of Omar’s finest. In my lunch tote, I’ve got a hard-boiled egg, water, a half peanut-butter and honey sandwich, a granola bar and some almonds. This is actually not a super healthy array of food. I’m sure a nutritionist would say it’s too much with the nuts. But it works for me. Keeps the hunger at bay.

Believe it or not, that will take me all the way to dinner.

I’m cooking every night now. No take out. And this is hard.

Our main staple is black beans. They’re cheap, healthy and you can do a ton of things with them. (Black bean cakes are the bomb.)

I urge you to try the easiest black bean soup ever. Had this last night.

Take two cans of black beans, drain and rinse. Reserve half of one can. Put all the rest in a blender. Add a cup and a half of vegetable broth, a cup of spicy salsa, a bunch of seasonings like salt, pepper, cumin, garam masala and blend til smooth. Put in a pot. Dump in the reserved whole beans. Add some corn if you like. Heat it up. The longer you heat it, the thicker it gets. Serve with sour cream. It is SO good. It’s perfect for a recession budget. And it is very healthy. And I promise you, it will be on your table in 15 minutes. And the next day, it will be thick enough to fold into a tortilla. MMMMM!!!

I also discovered something called quinoa. It’s a protein-rich seed that acts like rice. Except it’s not rice. You can serve it with the black beans or with anything that goes with rice:

Men’s Health calls qunioa the most nutritional food on the planet.

Get some people. Add it to your repertoire. It can be anything you want it to be. If you’re having an Italian dinner, add parmesan and a touch of butter. If you’re having Mexican, add cilantro and chili powder.

It’s super easy to prepare. And it keeps for a long time in the fridge. I make a huge amount on Sunday. And then serve it with whatever we’re having for dinner.

Now, I still have a mean sweet tooth. And I stumbled across a healthy-ish dessert that I can honestly say I like better than ice-cream. (Seriously.)

It’s Greek yogurt. I like a brand called Fage:

Listen to me people. If you like rich and creamy stuff, you will LOVE greek yogurt. It’s super thick. Low fat. Low calories. (Make sure to get the 2% kind. The full fat version is crazier than ice-cream.) You throw some honey on it, a few slices of fresh strawberries and a spoonful of granola? Oh. my. goodness. It is good.

Take a cup of milk, (I use soy since I’m lactose intolerant). Heat it till super hot, almost boiling. Steep a black tea bag in it. Add honey. Bam! Starbucks what? Starbucks who?

Tastes just as good as my Starbucks lattes. So when I’m not at the office and I can’t get to Omar’s, I have my homemade latte and save myself a bunch of money. Or if I’m craving something sweet while I’m watching my late night Will and Grace or Frasier, I have this tea instead. Added bonus: puts me to sleep in minutes.

I’m also making a salad to eat before dinner. Trying to do this every night. This is tough for me. I am so lazy. I hate washing the greens, cutting them up. Cutting the other veggies. Blah. Blah.Blah.

But I try to force myself. Because when I eat a salad before dinner, I end up eating much less. Some days, I don’t even eat the main dish because the salad has filled me up.

I add goat cheese and walnuts to my spinach leaves. YUM.

The biggest change to my diet has been decreasing my carb intake. Del, my assistant, is the king of all diet tips. (I got a eating-disorder side eye fixed on you Del…) He told me that if I stopped eating carbs completely, my stomach would be flatter in two weeks.

I have to say, he was right. I went hard. No bread. No nothing. Very little carbs. And in two weeks, my stomach was way flatter.

But you know what? A life without biscuits is not worth living. If I can’t have cornbread with my black bean soup than I’ll just have three slices of pizza.

So I’m eating carbs. Though not going overboard.

I like where I am right now. I can zip up my jeans. Feel like I’m getting stronger. And I like that I am not using food as entertainment or comfort. At least not as much as I used to. Well, actually, I am. But I’m comforting myself with tea lattes instead of Haagen Dazs, which is an improvement.

And I’m still living. Had some birthday cake the other day. Planning to take TG and Tog out for icecream today. And I think there’s a biscuit in my future this weekend.

I took Tog to the doctor for her checkup yesterday. Nurse put her on the scale. (Poor thing is only 30 pounds. Sigh). And of course, I just had to step on the scale and look. I was disappointed. I thought I’d lost more weight. I had to remind myself that I feel better. And that’s all that matters.

Alright people, updates! What are you eating for lunch today? What are you having for dinner tonight? If you don’t know the answer to either question, that’s a problem. Are you working out? Why? Why not? Talk to me. I’m calling folks out right now. Kimberly? Did you join Bally’s? You said you would in the Comments six weeks ago. Let’s go. Update me. Kimmie, I fell in love with you when you said, Last month I decided to say out loud that I was fat. Not chubby, stocky, chunky, curby, etc, but fat. That took such courage and committment. A lot of people have referenced that quote to me in later posts. What’s going on, girl? Elise, did you take that Wii Fit out of the box? Tamar, you are an inspiration and I read your comment often. How are you doing? Thurselle? Are you and your daughter still going hard with the gluten-free pasta. I tried it and did not like it. Hanif? Still hitting that drive thru? How often? Jay? What’s the deal? Tara, what’s up with that coffee mug of ice cream and the Oreo bits?

And not just my dear readers who were brave enough to comment on that post. I want to hear from newcomers to the eat better forever campaign too. What’s going on with you?

I’d love to hear from you… 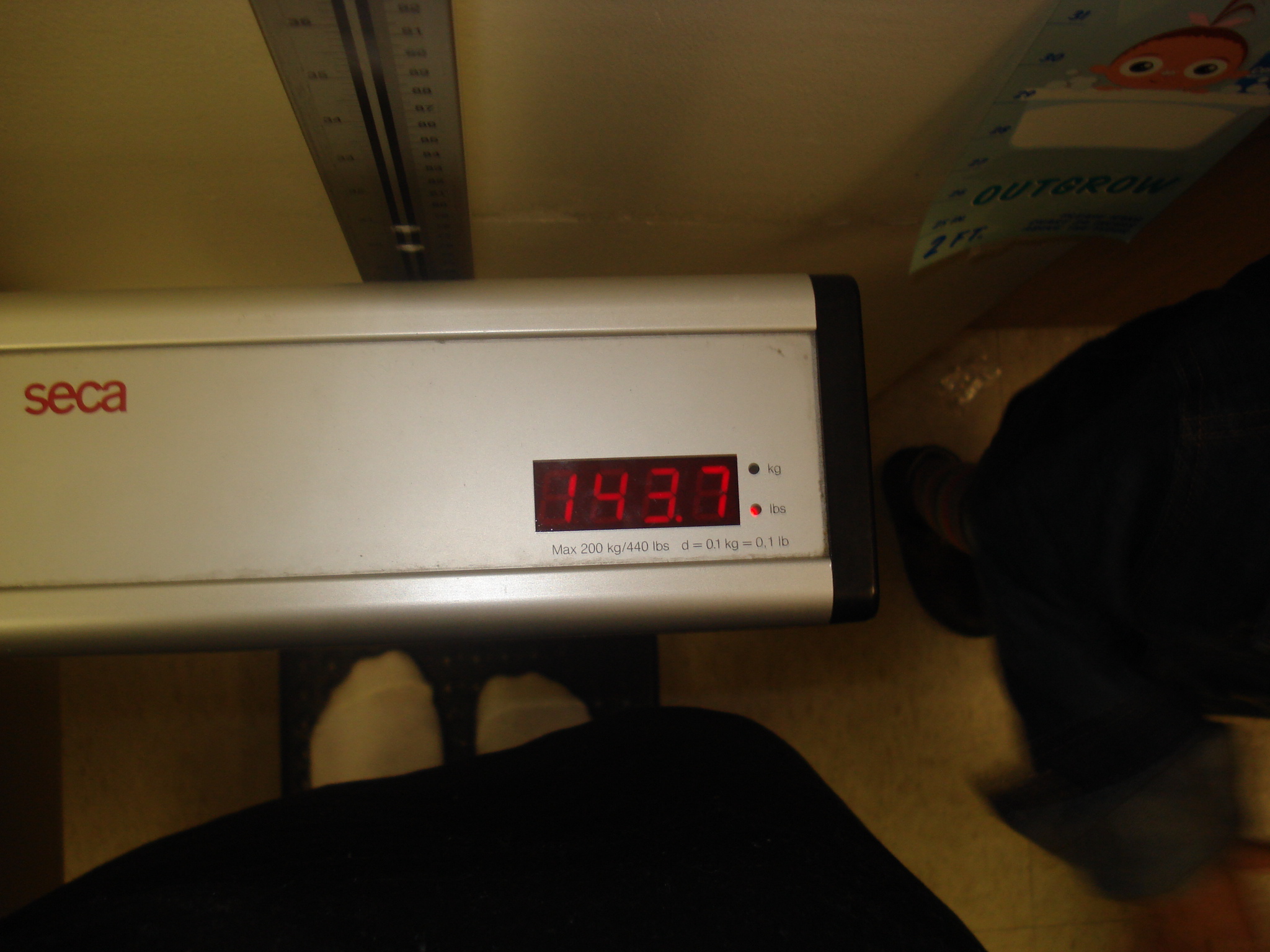