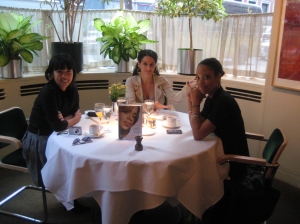 Rebecca, Laura and me at the infamous Michael's...

I started working at The Source in ’99, when it was the white-hot center of the hip-hop universe. I told my then-boyfriend that I got the job and he shrugged and said, “eh, anyone can work at The Source now. You’re not part of the A-team. You’re just a C-teamer.”  He meant that because I hadn’t worked there under Reginald Dennis and James Bernard and Chris Wilder and the whole original crew, then I wasn’t legitimate. I couldn’t really claim to belong like the old-school cats.

Got his point. Didn’t care. Okay, maybe I cared a little bit. But not really.

I’ve often wondered if the same idea applied to eating at Michael’s, a restaurant in midtown Manhattan known for being the white-hot center of the media universe. The food is an after-thought. It’s really all about getting the right table during the two hour lunch rush. Barbara Walters. Bill Clinton. Michael Wolff. Anyone who is anyone in media holds court at Michael’s for lunch.

Mediabistro’s Laurel Toby ran a column, (does it still run?), chronicling the who-sat-where at Michael’s on a weekly basis. I always loved that feature and all of the bold face names.

This pic tells the whole story. Even the people on the ends are bold-facers!!

Okay. So in my own goofy way, I’ve always wanted to go to Michael’s and rub elbows with the happy shiny media people. I’m in the media! I can hob-nob! Right?

I thought about it for years but never had the nerve to actually make a reservation. Who would I go with? Would they even give me a table? Was it corny to go to lunch there now, years and years after the first wave of famous folks made it hip? Would I be a C-teamer, globbing on to Michael’s glory all late and after the fact?

I contented myself with just reading the weekly updates on mediabistro and fantasizing.

This summer, the book I co-authored with Faith Evans hit the New York Times Bestseller’s List. And my girl Rebecca said, “this is it. This is our moment. We’re going to Michael’s to celebrate.”

We didn’t dare make a reservation for lunch. We went for breakfast instead.

I have to say, the food was forgettable. I had french toast, which was delicious. But my girls Rebecca and Laura had meals that looked….well, not good.

The place was empty. Just a few people sprinkled across maybe two tables. And I was too intimated too look around and see who else might have been there.

I had to remind myself. It’s just a frigging restaurant. I’m having french toast I could get at IHOP at a spot with white tablecloths. Not that deep.

We had a pretend book-signing and I autographed copies of Keep The Faith for Laura and Rebecca. (Which is silly, I know. I feel so weird about that. It’s Faith’s book. Not mine!)

Because I’m a hermit and rarely see my friends in real life, it was awesome to kick back with my girls and catch up in person and secretly marvel at our fake-fabulosity.

But the whole, hey-look-at-me, I’m-at-Michael’s! feeling faded before I finished my (lukewarm!!) coffee.

It was like going to Sylvia’s in Harlem anytime after 1991. You just don’t do it. You let other people do it.

The only way I can go back is if I’m a power-player and having a power-meeting over lunch at a choice table. Though I must say, when we walked out of the restaurant and met the one-and-only Michael himself outside on the street, I can’t front,  I was stoked. Told him I was there celebrating my new book and he was warm and friendly and congratulated me. Nice guy.

The next time I see my girls, (soon, I hope. you know there’s more celebrating to do!), I think we’ll make our own spot. If I can get them to Jersey, I’d think they’d like my version of Michael’s. It’s called Cafe Eclectic and it’s on Bloomfield Avenue in Montclair. There’s no fancy crowd. But they do make a mean soy latte and there are plenty of comfy chairs and wireless internet. Do you really need more than that?

Dear readers, tell me a place you’d love to visit, just so you can say you’ve been there…And if you made it there, let me know how it went down. Was it every thing you thought it would be? Or not even close… 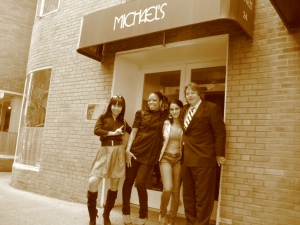