Tell The Truth and Shame The Devil: Melissa Forde, Lil Kim and Oprah

Posted at 10:15h in Tell the truth and shame the devil by Aliya S. King 20 Comments
0 Likes 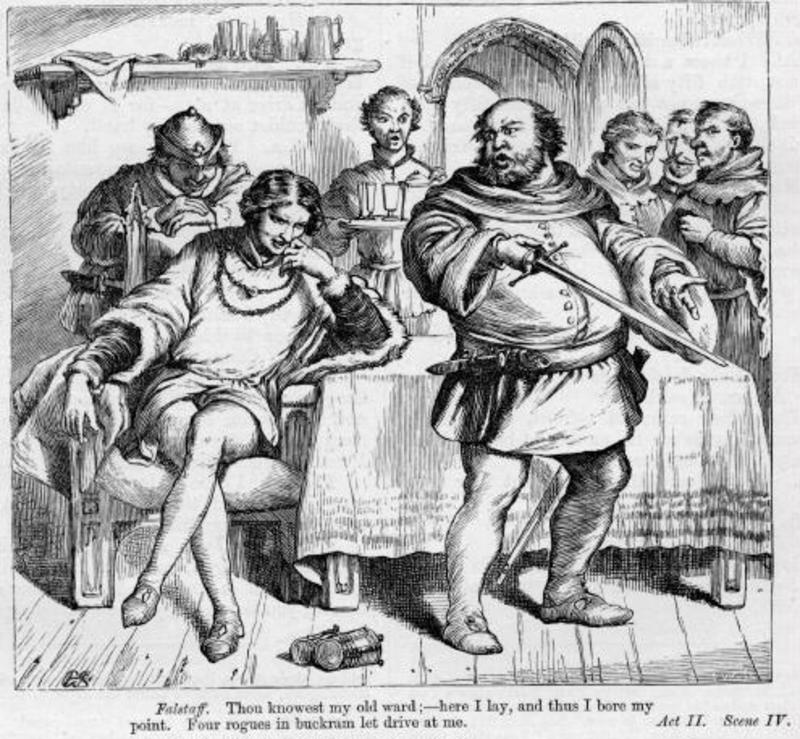 That's right you heard me! I said tell the truth and shame the devil!

In Shakespeare’s Henry IV: Part I, a character named Hotspur says the following:

Five hundred years later, the words still ring true. Sometimes, you just gotta tell the truth so you can shame the devil… Melissa Forde, I’m starting with you… 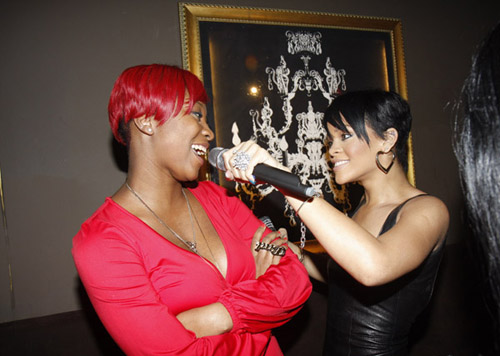 This young lady is Melissa Forde. She’s often referred to as Rihanna’s best friend. (That tattoo of roman numerals on Rhianna’s shoulder? Melissa’s birthdate. Which is hella strange to me. But whatever. I’m old I guess.)

Anyway. After the Chris Brown-Rhianna beatdown, police reports state that Chris Brown called Melissa and left her a voicemail apologizing for what happened and vowing to get help. (This could be what ultimately brings him down. Since my lawyer friends tell me this can be considered an admission of guilt).

Here’s what I don’t understand. The internets tell me that Melissa is one of the chicks in this pool, recently chilling with Brown and his crew. How is Melissa Forde chilling in the pool with Chris Brown a few weeks after he left a voicemail on her phone apologizing for beating her best friend to a bloody pulp? 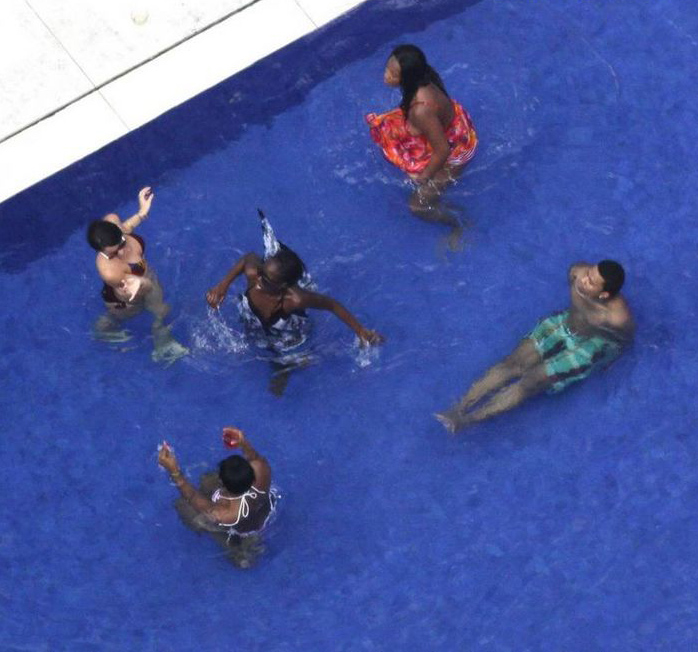 I’m not clear on this.

Let me tell you about my friends. If my man beat me up and then left a voicemail apologizing for it, here’s what would happen.

Victoria, my college roommate, would wait on the courthouse steps, cell phone in hand, waiting to testify. And if I got back with him, she would not speak to me, much less hang out poolside with the man who clocked me in the nose.

Maya, whose been my girl since 1978, would call my parents, sister and brother and set up the plan to whisk me away from dude and talk some sense into me.

My girl Portia would come to Miami. She’d hang out in the pool with him, smile in his face showing all her teeth, and then when he went to sleep? She’d castrate him. (She’s a trauma nurse in the ER. She could stitch him back up real nice.)

I’m not clear on how Melissa Forde is riding with Rihanna if this girl is really going back to Chris Brown.

Sidebar: I am not passing judgment on what happened in that car. Not even after seeing the picture of Rihanna. I can’t go by what the police report says. It only has one side to the story: Rihanna’s. Obviously, Chris was wrong. But only two people know what happened in that car. I have punched and kicked men in my lifetime, something no woman should EVER do. And lucky for me, dudes were mature enough to disengage and walk away instead of retaliating. But please believe that I will be teaching TG and Tog that they are never to put their hands on a man. Ever. No mushing in the face. No punching because you know he can’t (or at least shouldn’t) hit back. None of that crap. It’s not cute. And on the same hand, I teach my nephews that if some chick, (like the younger version of myself) tests them, they HAVE to find the strength to walk away.

No matter what went down. If Rihanna attacked Chris first and he hit her back in self defense, (unlikely, I know) or if Chris really is just a coward who lost his temper, I’m giving Melissa Forde the side eye here.

Truth: These people don’t want to lose their meal ticket. So they are going along with whatever so they don’t lose their place as sidemen. Devil is now shamed.

If you look better in a mug shot than you do when you’re mugging for the cameras, there’s a problem. Here’s Lil Kim in a 1996 mugshot photo. 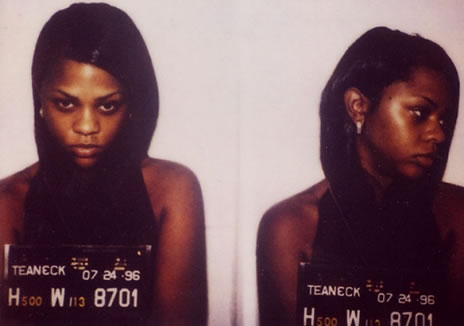 Here she is today. (This is not the picture I wanted to use. There is a more disturbing photo that I can’t find right now. It was snapped while she was walking into rehearsals for DWTS. She’s wearing a Louis Vuitton messenger bag and matching duffel. Which by the way, are hot. Anyone seen those photos of homegirl? Email ’em to me please.) 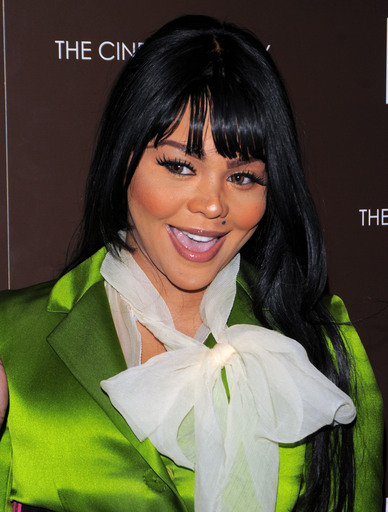 I think I’m seeing a nose job, boob implants, cheek implants?, skin bleaching (!!!), lip plumping and of course colored contacts. Can someone please explain to me how her neck is so much lighter? This girl was chocolate. BROWN. Now she is…not. Is this makeup? Or is she really straight bleaching her skin?

Truth: Kim has fallen off the deep end. And we’re all just sitting idly by, clucking our tongues. Devil is now shamed.

For the first time in the nine-year history of her epononymous magazine, Oprah is sharing the cover with none other than Michelle Obama. Check this out. 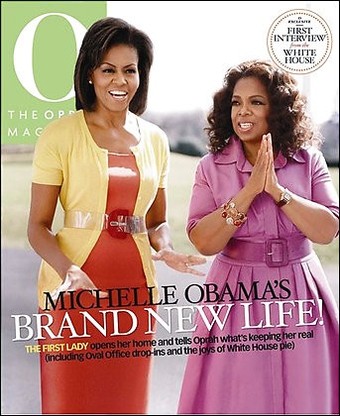 I would never have thought this combination could work! A tangerine dress, a yellow sweater and is that a clear plastic belt? Michelle looks smashing. Except for the helmet hair.

The cover is awkward though, no? Are they talking to each other? Is Oprah praying? Is Michelle giving a speech? Were they really standing together? I think I needed to see them embracing and looking directly at me. Or something.

Okay, the devil doesn’t really need to be shamed here. I just needed a reason to talk about this awesome cover.

Truth: Michelle Obama is my hero. And Oprah ain’t bad either.

I’d love to hear from you…

UPDATE: Here’s the picture of Lil Kim I wanted to use. (Thanks Tremaya!) Oh Kim, girl what have you done? 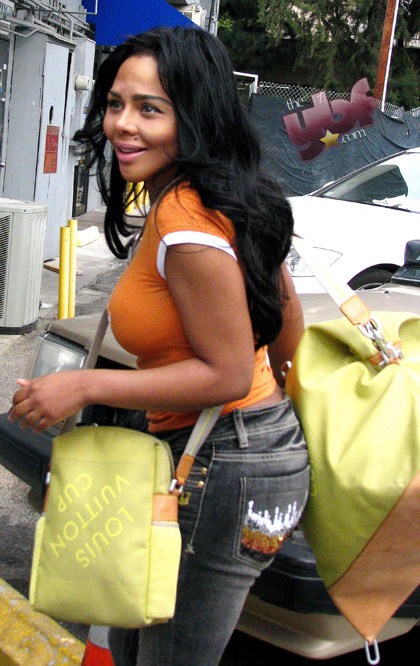