Where everybody knows your name…

26 Jan Where everybody knows your name…

As we all know, I had to give up my daily Starbucks habit in order to pay the rent on my writer’s paradise here in Newark, New Jersey. I found a Cuban restaurant named Omar’s across the street from my office. The first day I went in, I ordered a coffee, took a sip and went straight to heaven.

It was dark, rich and extra steaming hot. (I always order my coffee “extra-hot” from Starbucks and it’s still lukewarm by the time I get to the car. Ick.)

When you order “coffee” at a Cuban spot like Omar’s, you’re actually going to get cafe con leche, coffee with steamed milk. And dear readers, it is good. Now, it doesn’t come in the soothing, aesthetically pleasing packaging that Starbucks uses.

Marketing is something else. Cause as soon as I get this cup in my hand, I feel better. Before I even take a sip! They could put Dunkin Donuts coffee in there and it might taste good. Or not.

Omar’s coffee is actually way better than Starbucks. Even though they use that AWFUL and annoying lid that I despise. The one you have to lift up and push back.

These lids leak. And when you pull it up to your mouth, the sides poke your lips. Not cool. (I KNOW I am not the only one who hates the non-domed coffee cup lips. Please, someone, co-sign. When I used to go to Dunkin Donuts, I started ordering a medium sized coffee solely because the small cup came with the dreaded top. Only the medium got the domed top.)

As always, I digress.

The coffee is wonderful at Omar’s. And a cup costs a dollar. One. Dollar.

Do you know how much my Tall Cinnamon Dolce w/Soy costs? Triple that.

Also, Omar’s is much closer and more convenient that stopping at Starbucks and standing in line. I can park my car at the office, grab my coffee at Omar’s and walk right into work.

So why do I keep sneaking to Starbucks on the way to work?

I’ll tell you why. But it’s embarassing. So don’t laugh at me.

My office is in the Forest Hills section of North Newark. It is almost entirely Latino. In the month I’ve been here, I’ve never seen an African-American person. Nor have I heard anyone speaking English. On the little strip outside my window, there is a Sprint store, a pharmacy, a pediatrician’s office and a medical rehabiliation center. In the mornings, as I watch people scurry in and out, I hear only Spanish.

Omar’s is a true neighborhood spot. There are stools hugging a counter top. And about four or five small tables with chairs tucked under neatly. On the walls are vintage maps of Cuba and an advertisement that I love to look at. It’s a comely woman in a come-hither pose. And the caption says, “So close. But yet so far. Come to Cuba! Just 90 miles from Key West! (I think we can safely assume that advertisement is vintage.)

There are usually two or three couples having breakfast together. (Sidebar: This scene always intrigues me. The couples are usually in their late-20s, early 30s and look like they are on their way to work. And yet, they’re having a leisurely breakfast together. Where do they work and what do they do that allows them to have this wonderfully quiet breakfast together? I see the same couples in there once or twice a week. And they are always warm with each other, lingering over coffee. One couple always kisses goodbye outside the restaurant before heading in opposite directions).

Only men sit at the counters. The men are usually wearing work uniforms for places like Comcast and Verizon. Their eyes are glued to the news playing on the flat screen above the griddle where Omar cracks eggs and cooks bacon and potatoes. They shout out greetings to Omar and place orders, some to go. Some eat at the counter.

Omar is very handsome. Not very tall, dark hair and eyes. Always looks very serious. In the past month, I’ve come in and ordered the same thing. And he has never said a single word to me. Not one. Here’s how it goes down.

I come inside. Patrons look me up and down. Go back to whatever they were doing.

(Think of that scene in Jungle Fever, when Tyra Ferrell’s character walks into Nicolas Turturro’s Italian spot each day. And they all look her up and down, making a bunch of statements without saying a word. That’s exactly how it goes down…)

Omar looks at me.

Omar turns his back to me, grabs a cup, puts a bit of sugar in it, adds the espresso and the steamed milk. Puts the cap on it. Puts it on the counter.

I say thank you. Hand over my dollar.

Omar turns back to the griddle.

Let’s contrast that with Starbucks where Angelica, Victoria, Beth and a few others know me by name.

Me: Good! Just dropped her off.

Beth: Oh, and you have to try these new chocolate covered graham crackers. They are insane!

Me: I’m plugging away.

Beth: Okay hun, here’s your change. Have a good one. See you tomorrow!

And this was after I’d gone there like, three days in a row. Okay, I’m exaggerating. But you feel me. As a writer who spends large swaths of time alone in front of a computer with no one else around, I look forward to my small human interactions. Sad but true. I like to start my day with a brief conversation with someone. (And I’m not talking about TheHusband or TheGirl or TheOtherGirl. From 6AM to 7:30AM, our conversations revolve around lost socks, shoes that are suddenly too small and sandwiches that are not cut on a diagonal. That last one comes from my husband, who says if I don’t cut his sandwich in half, he feels like I just don’t care about him at all… )

So I had this fantasy that my new life in my new office would include coming into Omar’s and being greeted by the cute Verizon guys who might flirt harmlessly. And then Omar would smile and greet me by some little nickname like Pecasita, (which is an actual nickname I had briefly in college. Translates roughly to little freckled girl). And he would never ask me what I wanted, he’d have it ready as soon as I walked in. And we’d talk politics and Cuban art history and Che Guevarra and Castro and vive la revolucion!

But, um. No. Omar ain’t thinking about me. I actually feel a bit of disdain emanating from Omar, mixed with sheer indifference. There’s the tiniest bit of eye-rolling in Omar’s face when I order.

The funny thing is, I was once near-fluent in Spanish. I swear! It sounds silly. But it’s wholly true! I took Spanish for four years in high school so I had the basics. Then, my roommate from college is Dominican. And in two years of living with her, I picked up a few key phrases. Then I dated a guy, (the one who Deleted me!!), who taught himself Spanish and he taught me a few things too.

But what really did it was my two year stint teaching at Elizabeth High School in Elizabeth, New Jersey. The school is heavily Latino and my students taught me Spanish. I had a rule. Before class began and after class ended, you could only speak to me in Spanish. If you saw me in the halls or on the street: Espanol solamente.

Within six months, I could have a conversation with my students in Spanish. It was awesome.

But alas, after I left the high school and I didn’t have anyone to speak Spanish with anymore, I lost it. Completely. I can understand a bit. But my confidence to speak it is completely gone. But I want to tell Omar that I once had real Spanish street cred. Really!

But alas, at Omar’s, I’m just a plain old English-speaking American girl. A fraud in Omar’s eyes. He’ll never greet me warmly or tell me to have a nice day. The men on the stools will probably never flirt harmlessly. The couples having breakfast together may never wave or acknowledge that they see me every day.

And realizing how this makes me feel reminds me of how lonely a writer’s life can sometimes be.

I’m still going to kick my Starbucks habit and come to Omar’s instead. Maybe it will take more time before it becomes my version of Cheers and everyone yells out Aliya! when I come inside. Or maybe that will never happen. And that will be okay too.

Dear readers, do you have a special place? A restaurant perhaps. Or maybe just a corner store or a bakery, where everybody knows your name. A place where you are always greeted warmly and they know exactly what you like? I’d love to hear about it… 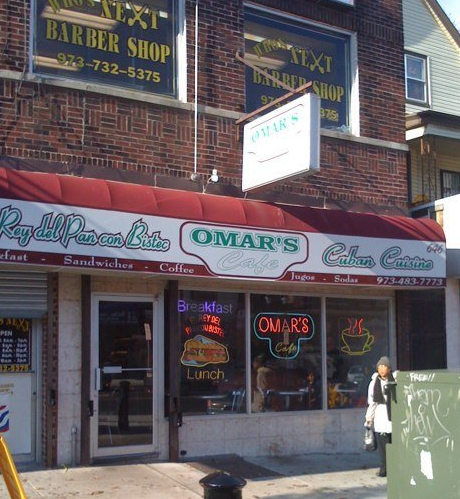